Let's Talk About Something Else For A While

Hello there. I've started another photoblog. Sure, sequels usually suck, but... at the very least, people will be able to keep track of Young's hair. 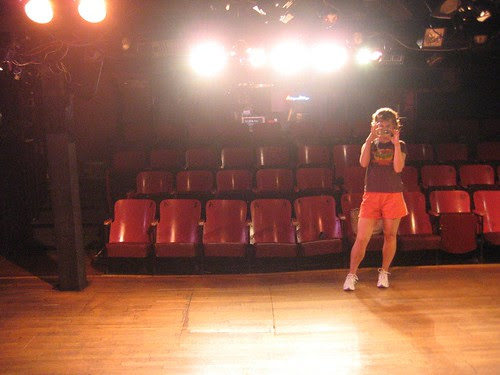 Sarah: One year. That's the plan.

I'm here in Boston for a week, helping Sarah settle into her new apartment, before I fly back home to Chicago. Today we stopped by the theater where she'll be performing and both snapped some pictures. Preparing for the move, Sarah bought a digital camera and started a photoblog of her own.

Sarah: I was really excited about my first entry, a picture of my suitcase in my empty old apartment. But then I realized, ahhhh, your blog started with a suitcase. It's the same thing.

Me: It's not the same thing.

I keep catching Sarah slyly trying to take pictures of me and I think, "I hope I don't look fat on her blog." It seems fair, though.

Sarah was (is) the girl.

Yep. That's it. (although, at some point, if something presents itself, there will probably be some kind of epilogue post, for the sake of symmetry.) Thanks for reading and thanks for commenting.

I'm looking forward to taking some time off, but I'm sure I'll eventually start another "Year" of something (don't know what yet) and when I do, I'll be sure to post a link here.

Until then, keep in touch. 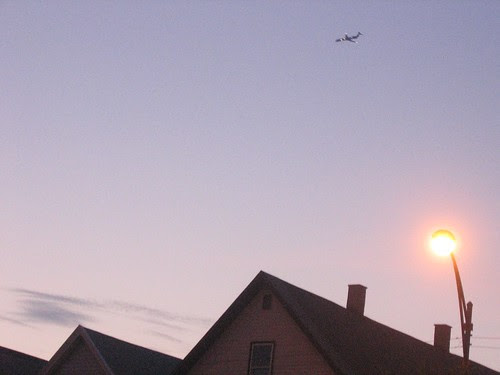 This day, June 21st, has been a significant date for me for several years but it wasn't until recently that I realized that it's also the summer solstice, the longest day of the year.

I guess I could have tried to spend the day doing something deep or symbolic, but things are busy at work, and that would have been kind of silly anyway. I did have about an hour around dusk, though, between work and heading out for an improv meeting to go out and walk around the neighborhood with my camera, hoping something poignant would happen to me.

And nothing did. But it was nice. I nodded to people walking their dogs. I saw rabbits run back and forth across yards. I watched at least seven planes move slowly through the sky and thought about how nice it can feel to come home.

I tried to take pictures of what I could, but rabbits are fast, planes are far away, and some moments aren't easily captured or translated.

Occasionally, if it didn't seem like anyone was looking, I would hold my arm out as far as I could and take a couple candid photos of myself. Those came out pretty alright.

a year following the breakup,
Arnie 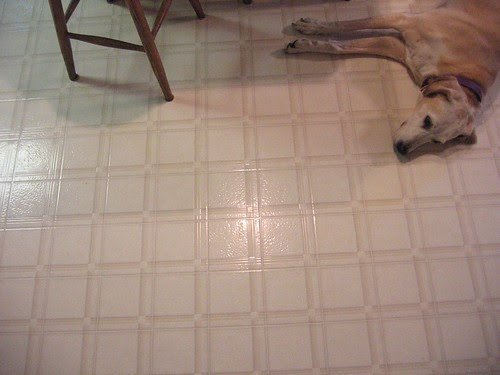 Mom: [via voicemail] Some bad news about Holden. He hadn’t been eating for the last three of four days. Initially we thought it was maybe because Allie went back to school for summer training. He’s been acting goofy as heck lately, trying to get up on the chairs, even when I was in the room, trying to get down into the basement. Anyway, today he took a nap and I couldn’t get him to get up. I called Dad and he came and took him to the vet. The vet said it looked like he was in some pain and we could try to keep him alive for a couple of months or put him to sleep. Dad decided to put him to sleep. I’m... I'm surprised. I feel really bad about it. So… there’s no more Holden. 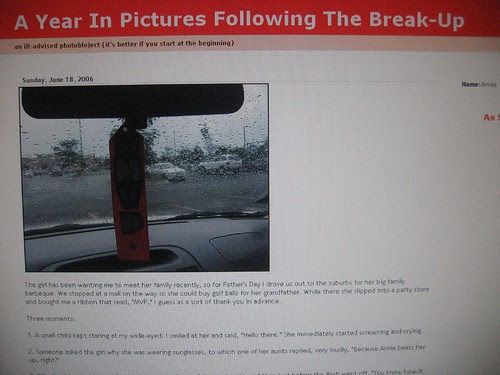 The girl had a long term relationship come to an end around the same time things were coming to close for N and me. She had a few drinks with her ex, J, on Thursday for his birthday. He talked about the girl he's dating now and asked about me. She told him about this blog and gave him the address. "I just thought he would like it."

This sort of surprised me. Not that I mind J reading it, but I know this weird blog, and the fact that I tend to write about the bad more than the good, must frustrate her. She's better about it than most people would be, but the picture of N and I about to kiss certainly made her sad. "Sometimes I hate your blog," she said, "But it's also, in a way, part of how I fell in love with you."

J read the blog and wrote the girl that it was a strangely voyeuristic experience but that he liked what he read and he thought I seemed like the kind of guy he would enjoy talking to. "I've always said you have good taste in men," he wrote. I can imagine myself making that same joke.

People ask me if N knows about this blog. I say, "I don't know." I haven't heard from her since before I found out she was diagnosed with MS. I've thought about e-mailing her recently, not to prod her into a response, but just to let her know I'm still doing well. I don't want it to seem like just more material for the blog, though, so I've decided to wait a bit.

When people ask me if I think N knows about the blog I also say, "I doubt. I really doubt it." They seem dubious that she wouldn't have googled me in all this time, but I know her better than they do. She took everything that might remind her of me and put it in a shoebox, and put that shoebox in her closet. But she'll keep that shoebox, just like she kept the shoeboxes for her other ex-boyfriends (most of them, oddly, named J).

I keep a lot of junk, a lot of it literally trash, but I don't have any shoeboxes. I looked for one today. Young didn't have one either.

Okay, wait for it... I guess this is my shoebox. One than I'm very close to putting the lid on and stowing away.

Someday, if N does see this, I hope it doesn't upset her too much. And I hope it makes her think that I seem like a guy she wouldn't mind talking to. 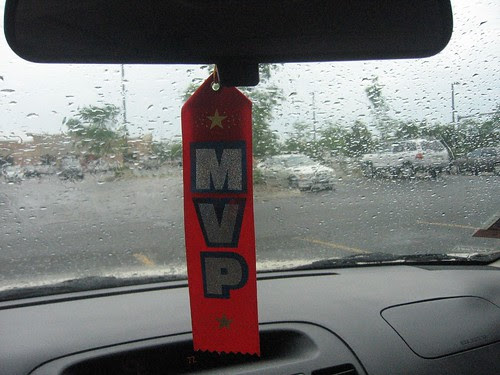 The girl has been wanting me to meet her family recently, so for Father's Day I drove us out to the suburbs for her big family barbeque. We stopped at a mall on the way so she could buy golf balls for her grandfather. While there she slipped into a party store and bought me a ribbon that read, "MVP," I guess as a sort of thank you in advance.

1. A small child kept staring at my wide-eyed. I smiled at her and said, "Hello there." She immediately started screaming and crying.

2. Someone asked the girl why she was wearing sunglasses, to which one of her aunts replied, very loudly, "Because Arnie beats her up, right?"

3. "We should get a picture of you two together," one of the aunts said, and then just before the flash went off, "You know how it is with couples and pictures, right? As soon as you take a picture together, you break up."

It was a good time. 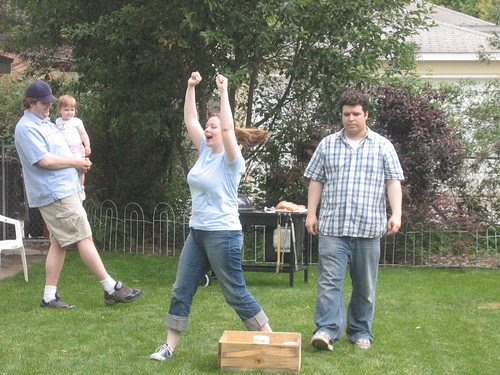 Hansen had a barbeque which led to a girls versus boys game of washers.

Maloney: Two points! Yay!
Young: [angrily] Remember what we talked about at the grocery store? 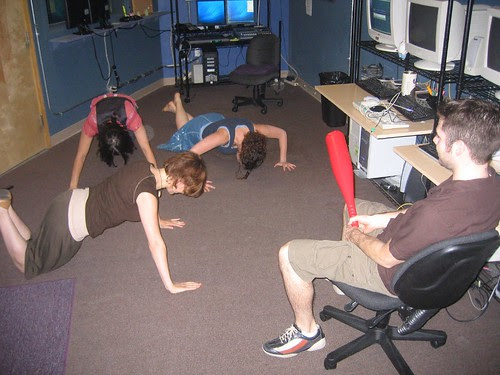 Even the most creative writing, when done all day, can become monotonous. The ladies at work decided to do push-ups to clear their brains. Chris watched. 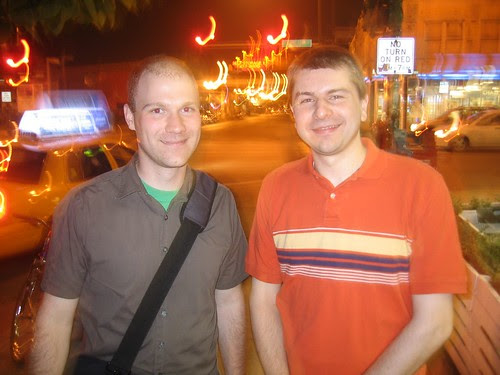 Kirk, the history teacher at Nick's school, is an old high school friend of mine. I hadn't seen him in years but he stumbled across this blog and saw Nick in it.

Nick: Here's how I know that he knows you... he said that it was weird because he hasn't seen you in so long, and last night he pretty much was able to catch up on the last year of your life in an hour. "But that's Arnie!" he said. So you were always known for the quick and pithy life synopsis, huh?

I grabbed a beer with Nick and Kirk at the Holiday Club. Kirk and I talked about the fact that we've heard a handful of people we went to high school with are living in Chicago, but, besides Tom, neither of us are in contact with any of them.

Kirk: Some of my grad school friends are even starting to drift away now.